We have taken an extended break from WoW to focus on Roblox, Minecraft, and other fun games.

You can see two of our newest videos below. Please subscribe and give us a big thumbs up. We are trying to make the funniest and most creative videos we possibly can for your enjoyment. These two are both Roblox videos with some very funny parts.

Enjoy! Let us know what you think in the comments on YouTube. Thanks for stopping by!!
at 11:42 AM No comments:

Heroics, Raiding, and Gearing my Toons

Its been a busy week in WoW mainly spent on heroics and raiding.  I'm now 90 on all of my main toons except my Death Knight whose at 89.  Its been tough, but finally I'm now able to start building my suits which happens to be one of my favorite things to do!  My Priest and Shaman are pretty geared already, but my mage has been lacking behind mainly because I hate waiting in long ques!

I did get some guild members together a couple of times to run some heroics that helped with the wait big time!  I wasn't sure how many guild members you needed for the guild achievement.  Its 3 in case you were wondering :)

I will be researching best of class suits soon so expect an update once I start. Take Care! 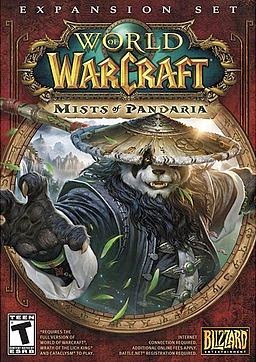 So I have been making really good progress since my return.  I hit 90 on 3 of my toons this week.  It was mostly questing except for my priest who spent most of her time healing dungeons.  It amazed me how tough the regular mode was compared to how the heroics are right now.  I guess starting at the end of expansion I should have expected most of the WoW population to have over geared the content by now.

I had 3 World of Warcraft accounts when I took my break, but for some reason one of the accounts only has a starter account now.  My guild bank was also empty.  Its sad because I know my account was hacked and when I emailed Blizzard they said the characters were under someone else's account and they can't talk to me about it because its not my name on the account. Pretty sure whoever hacked my account merged my WoW with their account.  I remember when you could just call and explain what happened and now it seems like no matter what I write they just don't understand. Needless to say I've become quite frustrated with the whole experience.  Luckily I only had a level 70 rogue and a 63 Paladin on the account.  I did lose about a 100k in gold and a lot of items, but I'm not going kill myself over it.

Plan on seeing some changes around the site as I work on a new template and make this blog a little more professional looking. Thanks for stopping by!
at 1:29 AM No comments:

Pet Battles, Questing, and Dungeons on the First Day Back!

Today I logged into my main account for the first time since 2012.  It was great logging into each of my toons until I realized I had to install add-ons, select my talents (which are completely different), research the new rotations, pick my glyphs, and find my way around.  My bags were so disorganized I didn't even bother to mess with them.
I decided to get my mage ready first so I could run some dungeons and do a few quests.  I'm not going to get into PvP until 90 most likely.  Maybe a daily here and there. 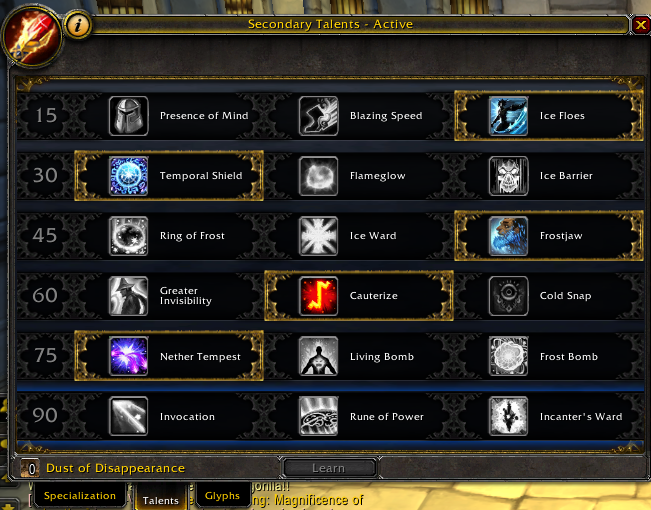 ﻿﻿﻿﻿﻿
These are talents I selected to start with and I'll be choosing Rune of Power at level 90.  I had to change around all my spell bars and I felt really rusty when I got started.  I slowly got into the groove as the hours went by though.  I rushed through 2 random dungeons and they felt really easy.  The whole time I was going through them I was messing with my party frames, add-ons, and other things I realized were very out of place or needed some customization when I joined the party.
It my quest to obtain all of the achievements I finished quite a few so far today.  Here they are in no particular order:
Stormstout Brewery
Temple of the Jade Serpent
Taming the Wild
An Uncommon Find
That was Close!
A Rare Catch
On a Roll
Cat Fight!
Just a Pup
I love the addition of the Pet Battles!  My Murkimus the Gladiator kicks ass!  His Heroic Leap ability is pretty awesome which allows me to miss an enemy attack and then land with a pretty powerful hit.  I did a couple of PvP Pet Battles and won them all except when I faced a Forest Moth who killed my whole team.  My other pets I brought to battle were the Baby Blizzard Bear and Dark Phoenix Hatchling.  I don't think I'll be sticking with either of them for the long term. 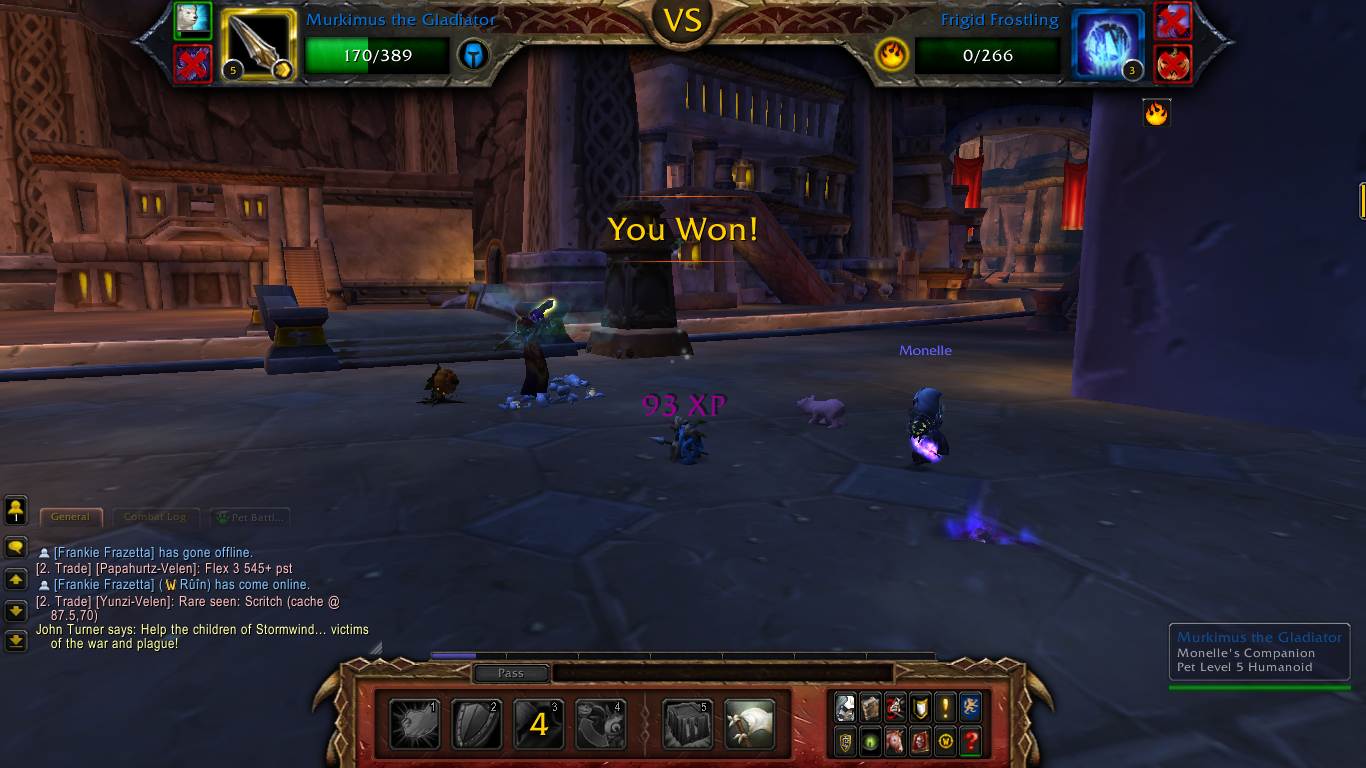 I won my first PvP match with a pretty easy victory.  I switched out pets a few times, but I probably didn't need to.  I feel like this game should be made into an app so I can play on my phone and tablet when I am sitting around.  Blizzard are you listening??
It was a pretty productive first day back though I didn't even gain a level.  I am pretty close and with how fast I was gaining experience questing I don't think it will take very long to hit 90.  I am going take my time though and enjoy my time back.
﻿﻿﻿﻿﻿﻿

Time for a Comeback

I have been thinking about a comeback for quite some time now.  Recently my time has been spent on the PS4 and playing games like Call of Duty, Battlefield 4, Skylanders, and Madden primarily.  I tried some other games like World of Warcraft, but none of them could keep my attention for very long.    I miss playing WoW and having a purpose when I gamed.   I miss gathering for raids, collecting ingredients, and completing dailies.  Hell, I even miss the grind of leveling up new toons.  I loved the feeling of getting those rare drops during a raid and winning the roll.  Even better when you had the gems and ingredients needed to upgrade the piece in your bag.

I left during the tail end of Cataclysm so I've missed a lot.  I miss PvP badly too.  And who could forget about the achievements which give new meaning to old and current content.  I hope the changes that have been made since I left are for the better.  I will be back.  Might be a week or a month, but I'm coming back with a full rundown of my successes and challenges.  Too many WoW blogs have died and its time this one is reborn.

I'll see everyone real soon in Azeroth!
at 1:43 PM No comments:

I love this new patch!  They are buffing my favorite spec, Arcane!!  Here are the changes below:

Talent Specializations
*         Arcane
Arcane Barrage damage has been increased by 13%. 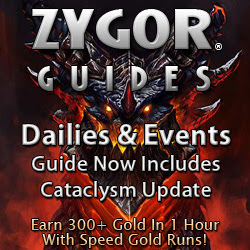